Last week German community organisation KICKFAIR were crowned winners of the Sport for Good award at the 2021 Laureus World Sports Awards for its KICKFORMORE programme.

The virtual event which was hosted in Seville celebrated the achievements of sportsmen and women and their impact on society.

“Every year when I see the real big [names] on the stage [at the] Laureus Sport for Good awards, I think ‘wow’ and now we’re standing here ourselves. This is just amazing.”

Mirzo’s story began in Iraq, from where he fled in 2001. Growing up in Offenburg, Mazen saw himself struggled to make friends, and found himself always getting into trouble and feeling lost without a sense of place or belonging.

When the KICKFORMORE project came to his school, that changed, and since then he has become a young leader in the project that empowers young people to break down barriers of culture and gender within a sporting and educational environment. 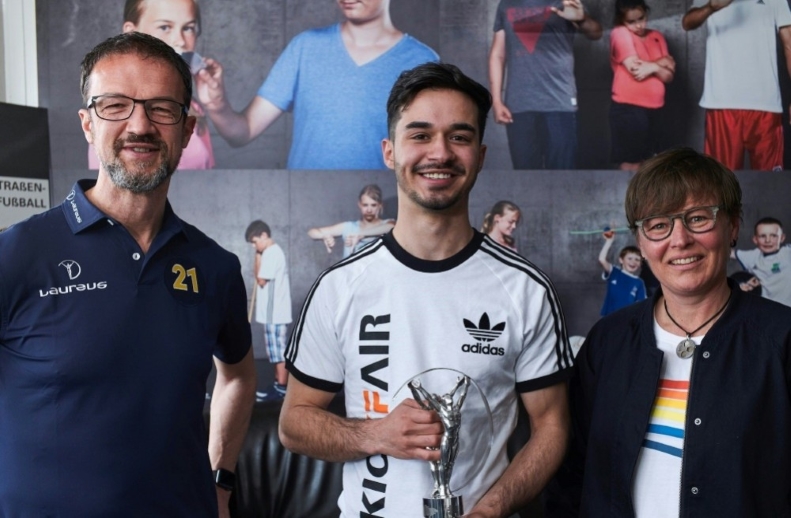 Based in the Stuttgart and Rhein-Neckar region, the street football programme uses the game as a unifying, universal language to create positive change.

Before every game, participants agree on 'fairness rules' and discuss their fulfilment after the game. Fairness points count as much as goals scored.

Only those who play fair have a chance of winning. The students organise, moderate and reflect on what happens before, after and during the game.

This initiates the acquisition of social skills and encourages rule awareness and respect.

Older participants become young leaders and pass on their knowledge and experience to younger ones acting as positive role models.

With a major focus on refugees and building bridges between cultures, KICKFORMORE advances ideals of a culture of peace and non-violence, human rights, gender equality and an appreciation of cultural diversity.

The programme helps young people who are most affected by existing inequalities to develop into self-confident, empowered and respectful global citizens.

“Thank you so much for this fantastic award,” said Steffi Biester, KICKFAIR co-founder.

“It belongs to all of those who are part of the KICKFORMORE success story.

“That's the kids on [the] first hand but it's also all the youth leaders like Mazen all the multipliers in the programmes. It's also the whole Laureus Sport for Good family.

“And warm regards to the Kenya Boxing Girls and the Colombianitos. We Know you both would have deserved this award just as much as we do.”

India: Beyond The Statistics of COVID-19

Covid-19 Response Fund: One Year On